And I don't care if you shave - but did you ever stop to think about why you did it? And if your answer is: because it looks better, well have you ever wondered why you think it looks better? Culture decides our beauty preferences - right now that seems to mean (in preferred order I believe): thin, white, hairless and tall. I probably forgot something.

Anyway back to the justice part. Seing bullshit comments about how MY hair is gross and unsanitary makes me livid. You know, Internet livid. Which means I write a blog post. I'm not stupid enough to comment directly because who needs that shitstorm and comments about being a dirty feminist... Okay, I'm a coward. I admit that. I rarely discuss on the internet - it's just not worth it. In my last post I wrote about having anger management issues. Well, the safest way to avoid having a (hissy) fit and end up shaking and crying from anger is avoiding idiots. But I still read the comments because it's nice to be confirmed in the worlds utter decay - apparently (I do like the responses to the Dr. Seuss comment though - the like on Yaels and Sherris comments, that's me): Also I know men also have issues. Also with hair. They should totally write blog posts about that. I'm not going to.

My very confused point is: Do you ever stop and wonder why you think the things you do? To me the "hair is unsanitary" comment is just another way of saying "but I'm only worried about your health" after you've called an overweight person gross. 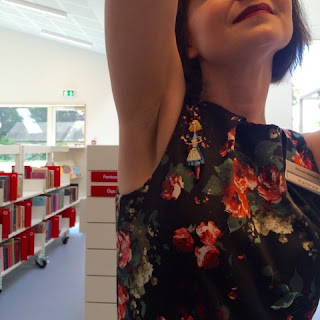 Wouldn't it be nice if you could do this 'confidently' as the hair removing device adverts call it, not because you remembered to get rid of hair but because nobody would care if there was hair, stubbles (*cough guilty cough*) or not?

There you go. A little low-practical feminism to start of your weekend ;) A hairy revolution if you will. Okay, not that. Forget I said that last bit.