Today I had my first writer's thing-arrangement-tiny conference with a Norwegian children's book author and (more importantly?) graphic designer, Stian Hole. The publisher (an intern to be precise) sent me a copy of his very first book that was published in Norway 10 years ago and now is to be published for the first time in Denmark. He has however have other books published in Denmark and in English I believe? The Garmann trilogy. Really beautiful books. 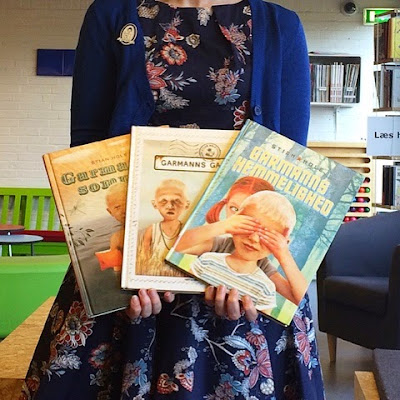 The book didn't come with an explanation but I'm not thick. I have a 6 months career as a children's librarian behind me. I wasn't invited because of that. So Instagram it must be as it is the only other thing I really do. I have more or less gradually changed my IG to my librarian identity - but it's still mostly focussed on dresses. I know I probably should pace myself with the bookstagrams. 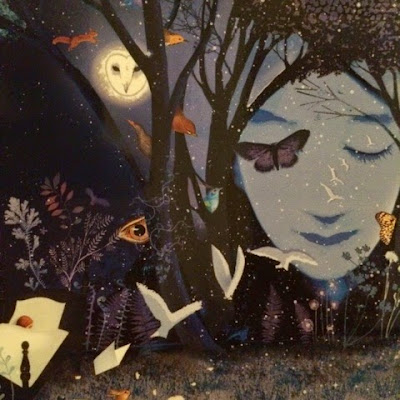 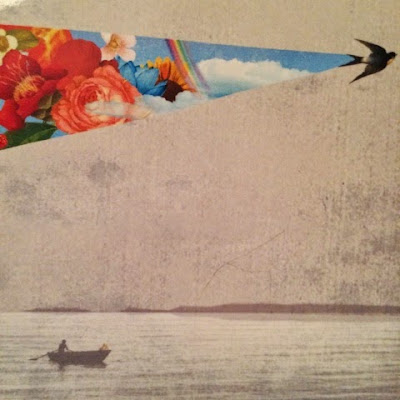 I was also invited to this thing. Stian Hole (the author) would be there. There would be a professor of litterature to talk about his books and another writer of non-fiction to talk about how teachers could use his books in classes. It sounded very interesting. Then I read the invitation again. Just me. Not a plus one. I decided I could do this. I'm an adult. I'm a goddamned professional. I can do professional things without someone having my back. So I accepted the invitation.

But the fear was nagging me. Alone. I wouldn't know anyone. 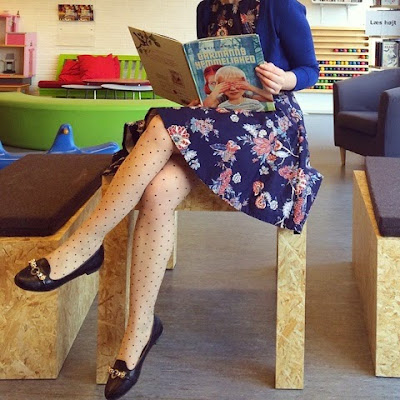 And then it was. I was there early and had a crappy 7-11 donut while reading Harry Potter in the sun. I was okay. I was ready to do this. I walked to the door, trying to ignore that my breath was catching and my knees almost knocking together. Some very adult looking adults had walked in just seconds before me chattering away laughing. One had a very blond, very trendy hair cut that I sort of envied I couldn't pull of. She looked terrifying in a cool I-am-a-succesful-woman kinda way. I followed them in the door and decided to hang my coat on a coat rack just inside. Couldn't be caught carting that around like I didn't know what to do with it. Which I wouldn't know. Better get rid of it. 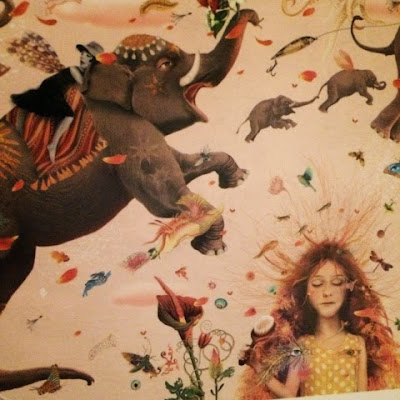 In the conference room a table was filling up with people who all seemed to know eachother. I chose the other one. It had just one woman on the other side. She looked at me: I know you from Instagram I think.
"Yeah. Dictiocanary" I said with an almost apologetic - in my mind anyway - smile. I have never introduced myself with my IG handle before. I wanted to ask her name but the words caught and I didn't. I kicked myself mentally for being arrogant and rude but I couldn't speak. I just sat there mouthing wordless apologies to every single fictional character I have yelled at or rolled my eyes at because why don't you just say anything??

And I just sat there. Then the thing started. I was good. It was good. Interesting. I'm a good student when I want to be. And hanging by every word that was said from the front I didn't have to look around. At all these grown up faces. And then there was a break. And I just sat there. Not wanting to move. I was there because I am able to put a fucking dress on and look pretty. I was there because I would help make publicity for the release. I don't mind this, I might add. But usually it's a dress or an accessorie. This was my thing - what I'm actually good at. And I wasn't invited because I'm a good librarian. And for the first time I felt the pain of being a human mannequin. (I have felt slight annoyance before - if you have written something heartfelt and people just comment: Where did you get that dress? I have to wait a minute replying - and they don't get a smiley face. Okay, sometimes they do) But I sat there feeling utterly inferior and like I didn't belong. How could I possibly talk to these people without sounding like a blithering idiot? I sat there regretting I had a fucking bow in my hair. What was I thinking? These were teachers and real critics. I was a joke in my pretty dress, bow and ...I looked at my shoes ...there's zebras on my loafers. Of course there is. I had to pee but getting up would draw attention to myself so I stayed put, drinking tiny glass after tiny glass of sparkling water - which is clever when you have to pee... The woman who knew me had left. She wasn't staying for the second part.

A lady came in and announced that Stian would sign some books now and some after. I grabbed my bag and rushed out. I asked him to sign it to my nephew and said with what I intended to be a smile but probably was a horrified smirk that "it seemed a waste for an adult to keep it for herself". The woman behind me scoffed and said she was keeping hers. I smiled (again probably not) apologetically to her as well. Just one big excuse for yourself today eh.

I returned to my seat and the non-fiction writer was very interesting and I agreed with myself it was good I stayed. Afterwards there would be a glass of wine and I was sure that would make the small talk easier.

Wrong. I ended up in a corner terrified, tongue tied and out of battery. I had plugged my phone in so I couldn't leave until it had a bit more juice. I had successfully cornered myself. Every damn animal knows this isn't a good strategy - and clearly I'm no smarter than a badger. Difference is I can't even chew through a boot to escape. I tried to look like I belong in a conversation but I knew I was sticking out like a pimple on a prince in that dress looking like nobody else.

In the end the authors wife struck up a conversation (she actually complimented my dress). She didn't know anyone either and obviously Stian was occupied signing and small talking. Trouble was...she was also Norwegian. I don't understand Norwegian very well. I can read it. In writing is so close to Danish you would be fooled if you didn't know. But they sing - rather like French. Danish is flat and gutteral. More like German. Norwegians and Swedes sing their language. It's very beautiful. But incomprehesible to me. And you see, Stian held his speech in Norwegian. I had already halfway faked understanding that (I got some but I'm afraid a lot was lost on me) so I couldn't very well ask her to speak English as I usually do when encountering a Norwegian. 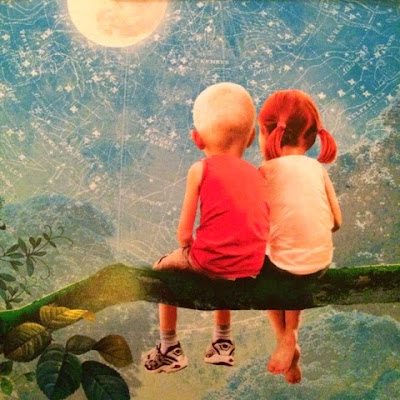 The conversation was I'm afraid rather pitiful with a lot of "excuse me"s on my part. I'm happy though that we found each other none the less. And then I fled - after trying to thank the lady from the publishing company and possibly promising that every library in Denmark would buy the damn book (It really is rather spectular so I'm okay with that but I don't think I can keep my promise - I just panicked and didn't know what to say as I was pretty sure she had no idea who I was). I finally was alone in the hall way muttering "damn damn damn damn" repeat into infinity.

And I went home. I'm not going to do well in the social book scene if I don't get my anxiety under control. It's a tricky thing though. I genuinely thought I'd be okay because I have mastered every other aspect of my life. This is new. Being a professional. Actually being good at it (if we can look past today that is). Making people aware that I may dress like a 5-year old (and read the same books) but I am an adult. The barriers I suspect isn't with others. They are with me. I see me through their eyes with my eyes. And my eyes are awfully unfair to me. 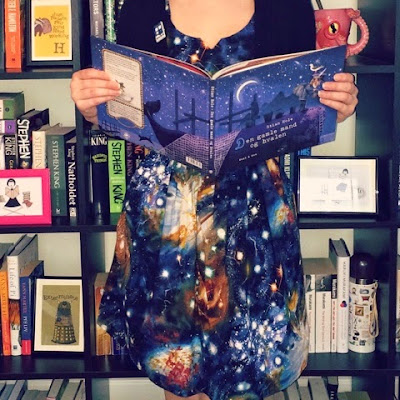 (I didn't write this to make you tell me I'm wrong or that I shouldn't care what other people think. First of all, yes, I probably am, but that doesn't make my experience and perception of the event less real. Sadly that's how reality works: differently for everyone. And second, that's not actually helpful. It's kinda like asking a person with depression to 'just cheer up'. (only that's worse, don't ever do that). I'm just telling a story, not asking to be fixed because that's something I can only do myself. And also being told I'm silly for feeling how I'm feeling isn't really the best feeling - and I do believe that's enough about feelings for the next 6 months ;) )