When I was 13 my ex-stepfather's son came to live with us from Australia. He was a year or so older than me and to say we didn't get along is putting it nicely. We fought a lot. Both verbally and physically. Turns out he was (figuratively speaking) pulling my pigtails because he liked me. Has that ever actually worked? For anyone except Edward Cullen anyway. Urgh some boys really!

Obviously he didn't speak Danish at first having grown up in Australia. Unfortunately that was no hindrance for him to talk to me because I spoke English too well to pretend I didn't understand him. One day he had me pinned up against the wall, choking me as usual (don't get your knickers in a twist, we were equally horrible to eachother and while he was stronger than me I definitely was more cunning and cruel). And I initiated as much as he did. This time it was him though. I don't remember why or what I'd retorted to make him this angry - but cruelty and spitefulness was my specialty, being too small to rely on brute force.

My mind was racing as to how to get away this time and I suddenly remembered a book I had just read. A rather silly funny book that featured a creature called a Slobbergob. And a plan formed.
"You! You SLOBBERGOB" I yelled and immidiately slapped my hands across my mouth with a horrified look on my face. Eyes huge and scared. "Don't tell your dad I called you that! Please please please" I've never been much of an actor but I even managed to tear up a little. 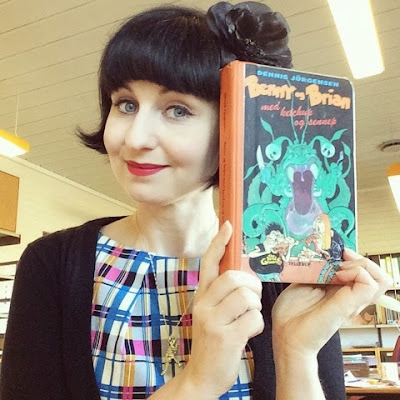 Of course he raced down to tell on me. The only thing better than torturing me himself was having his father do the dirty work. "Kathrine called me slobberglob!", he screamed. His father looked at him, confused and angry to be disturbed. "She called me a slobberglob...", he trailed off beginning to realize he had been tricked.

While his father yelled at him for disturbing him with such utter nonsense I slipped off to return to my santuary at the library to reread the book that got me out of trouble this time.

Of course I was back in trouble when I came home. That his wifes daughter so easily outsmarted his son was bound to be punished. He never laid a hand on me but I wish he had. I think that would have my mother snap and leave him much sooner. But he was a cunning son of a bitch. I think having had an abusive relationship up close and personal and seeing how easily it can break an otherwise strong woman is very scary especially when that woman is your mother. It's bound to change you and how you view the world.

It sorta goes with this story that my stepfather was an ass. He wasn't at first. But once he had his foot in the door, he became an abusive asshole. As bad as it was for me (being the devil's spawn and all as he later called me) it was a houndred times worse for my three younger siblings as he was their actual father. Looong story short: In the end he (and Patrick) left to be Muslims in Turkey full time, he came back (Patrick was shipped back to Australia when he became to hard to control), he tried to get custody of the kids, didn't succeed and left again for Turkey and have had no more contact with my siblings. He did however send letters to me that my mother intercepted. That's were the devil's spawn thing comes from. I didn't read those until much later. I don't know what he expected but I was kinda flattered he thought so highly of me and my evilness.

As far as I know he remarried, fucked that up too and is now alone and hopefully miserable. And I have gone from wanted to beat the crap out of him with a dirty lawn chair myself to just hoping a tiny personal earth quake will shallow him up. I carry grudges with the same ease others carry flowers. The not being able to protect my siblings and my mother from his cruelty and callousness sent me spiraling in depressions and self injuring for years after. Not just him of course. I also had the luxury of being bullied and attacked daily in school, I couldn't even protect myself. My only sanctuary was the library and the woods where I dreamed up countless revenge plans I couldn't carry out because after all I was just a skinny kid who was small for her age.

There's always more to people than meets the eye, isn't that so?